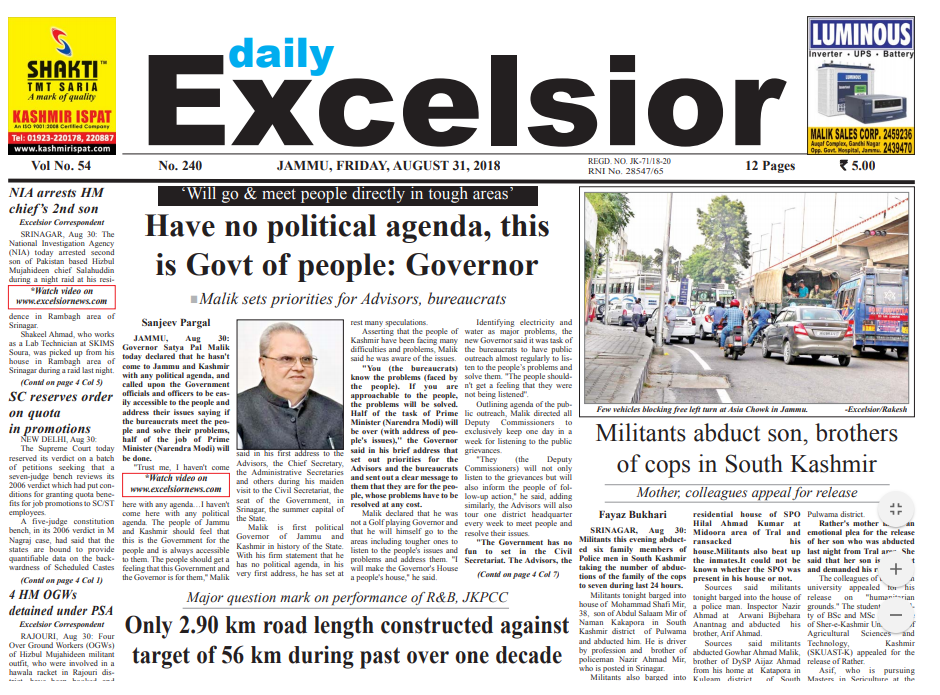 The Daily Excelsior is a daily English newspaper published in Jammu, a city in the Indian State of Jammu and Kashmir. The newspaper was established in 1965 and its current editors are Mr.Kamal Rohmetra and Mr.Neeraj Rohmetra. The newspaper has always known for going a level extra for its readers. On May 11th 2008, photojournalist Mr.Ashok Sodhi was shot dead while photographing an armed confrontation between terrorists and security forces in the Samba District of Jammu and Kashmir. He moved closer to capture better coverage of the confrontation when a bullet hit him.

The newspaper has its advertisement representatives fanned across different parts of India including New Delhi, Kolkata, Chennai, Hyderabad, Mumbai, Ahmadabad and Kanpur. The content of the newspaper is rich and has a good connect with the audience.

With Bookmyad, you can make your display advertisement booking in The Daily Excelsior Newspaper online. You can also book your business ads, property ads, matrimonial ads, tender ads and many more at discounted rates. With us you can make your advertisement reach out to people all over the nation on a big scale including major cities like Delhi, Mumbai, Bangalore, Kolkata, Chennai, Chandigarh, Nagpur and many more other cities like these. Contact us for best packages and discounts.

— Package of the Daily Excelsior —

talk to our expert from
Daily Excelsior